The colossal range of Maybelline is undoubtedly famous, from the time the Colossal Kajal was launched in 2011-12. It created a revolution in the makeup world of India as several other brands took inspiration from the Colossal, Kajal, for their new products, such as Lakme Eyeconic Kajal, LO’real Kajal Magique, Faces Magnet eyes Kajal and so on. There are many brands in India which sell Kajal, however, Maybelline set itself aside. The kajal was priced at 150 rupees and was quite expensive considering the fact that you can buy kajal for 20-60 rupees from well-known brands. The main/unique selling point of the colossal range is its claim to last long from 6-24 hours and its pricing gave the audience a feeling of being exclusive.

I always use a liquid liner on a daily basis and I do not like to splurge a lot. After trying liquid liners from brands like Coloressence, Elle 18 and Eyetex I settled with Lakme Insta liner. However, the major problem with these budget liners is that they smudge easily and are not water-proof at all. I also apply eyeshadow which tends to ruin the applicators of these liners.

I found a good offer of getting a Garnier micellar water (50 ml) bottle free with this liner, so I went for it!

Here are my views on the new Maybelline The colossal Bold Liner: 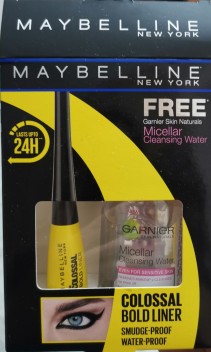 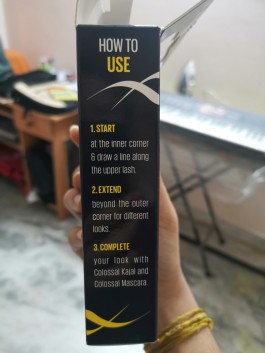 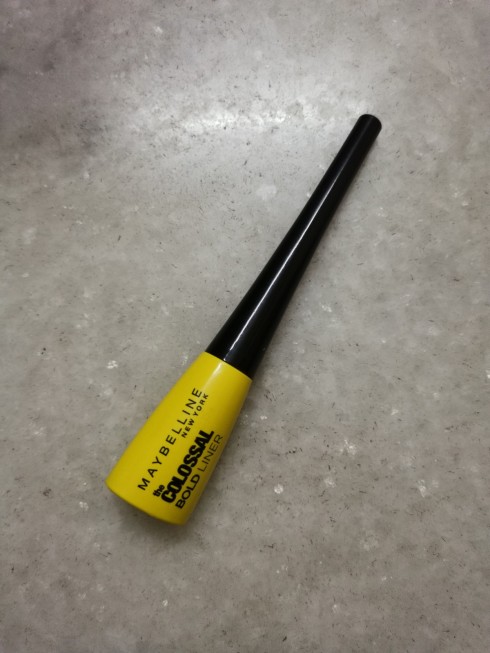 As I mentioned this isn’t the conventional packing (you can look at the main banner for that) of this product as I got a combo offer pack. Maybelline sticks with its classic yellow and black colossal range packaging. The packaging also displays steps for applying the liner and pictures of different liner styles AKA colossal looks. I find this helpful for beginners or those who are not very accustomed to using a liquid liner. When I held the liner it was very tiny and lightweight, many liners come with a glass packaging and are heavy. The liner is sturdy and less likely to leak inside your purse. Which is a big relief!

I think its ridiculously expensive for the quantity of product we get! It is better if you buy it online from Purplle or Amazon where it is priced at 190 RS during sales.

The applicator is in between being stiff and mobile, which is great if your hands get shaky. It is thick at the bottom and gets thinner towards the ending as you can see in the picture. You can easily draw a thin line or a thick line using this eyeliner. (This one is much better than the Colossal sketch liner applicator and formula. )

The first swatch is of multiple swipes with the liner, it is jet black and dries really quickly. The second swatch is of a single swipe with the applicator.

The colossal Bold liner was great when I applied it over my eyeshadow:

The applicator was unaffected after I applied the liner over a shimmery eyeshadow. The liner still looks like its jet black and not dark greyish, which is where it earns a few points from me.

It is safe to say that the colossal bold liner is not completely smudge-free, though I had to rub over the swatches at the back of my palm rigorously, it did chip off a little. It is smudge-proof in comparison to other liquid liners but not completely. I can see it lasting for 24 hours (at least bits of it!).

Maybelline also claims that this liner is water-proof, I think its high time for brands to stop deceiving its customers with such false claims. The liner is for sure WATER-RESISTANT but it is not WATER-PROOF. In simple terms, if you splash your face with water the liner would not budge but if you rub your eyes with that water it is going to come off.

Do I recommend this liquid liner?

Yes, but if only it is on sale and you want a good liner to apply over eyeshadow.

I personally stick with my regular eyeliner for daily use and use the colossal liner only on days when I apply eyeshadow, that is a good way of using this. If you are an avid traveller it is easy to carry this liner as you go.

Mirror for your reflections